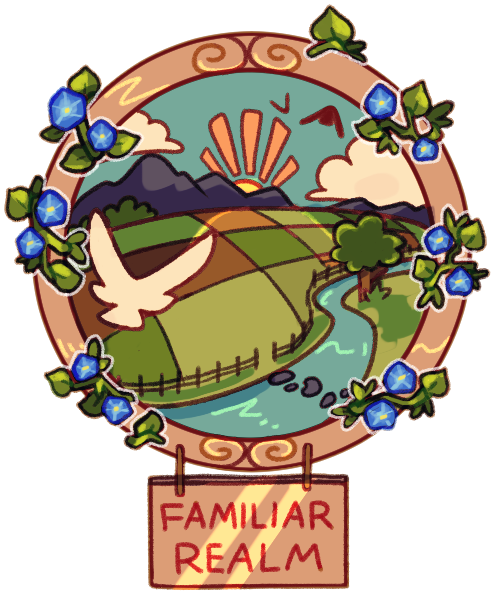 The realm most like our own world, the Familiar Realm is a vast wilderness dotted with bustling cities and sleepy villages. The people here live simple and honest lives alongside (and sometimes despite) the untamable nature that surrounds them. Located on a planet about three times the size of Earth, many parts of this realm have yet to be inhabited. Populations are scattered across the globe's surface and historically have had little interaction with each other.

Community is a highly treasured thing in this realm; newcomers and old friends alike have an easy time fitting in here. This has made the realm a popular destination for Travelers! The beauty and danger of the untamed wilds is an alluring bonus to those seeking out adventure. Vast grasslands, rugged mountains, endless seas, bustling towns; all of this and more can be found in the Familiar Realm!

The Familiar Realm is inspired by the settings of classic fantasy rpgs and adventure stories. The technology here is somewhat behind our modern day, and most buildings are still made by hand from stone and wood. Stories of monsters and legendary heroes are passed around like warm blankets to keep the inhabitants' minds from the daunting realization of how much they truly have yet to discover about their own realm.

If exploring and/or living a quiet™ agrarian life gets your gears turning, this is the realm for you! 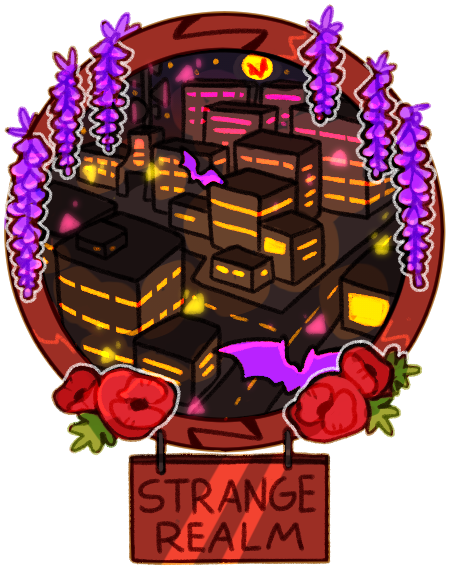 The Strange Realm takes the form of a massive, sprawling metropolis. Unexpected surprises lie hidden in every dark alley and around every neon-lit corner. The Strange Realm's residents are beyond description: creatures of all shapes and sizes call this chaotic place their home. Known for its cutthroat consumerist society, the realm itself is entirely comprised of an infinite, looping city locked in eternal nightfall.

Due to the scarce nature of natural resources in their world, denizens of the Strange Realm value material goods all else. The layout of the city expands and shrinks as it pleases, making even space itself a hot commodity. A beautiful park may reappear after vanishing for months, or a residential area may find itself suddenly in the middle of the bay! The single unmoving anchor of the city is the iconic Radio Tower: towering over all else and situated in the center of the realm, this communications tower keeps everything connected. Recently, it has been made capable of transmitting to the other realms.

The Strange Realm is based off of the concept of megacities, but mixed with a Heaping pinch of urban fantasy! The residents of the Strange Realm are nothing if not innovators, and the addition of magic has allowed their technology to far surpass us. Despite the seemingly harsh environment, nature here still thrives in the small pockets it can carve out for itself. A number of lush parks, lakes, and rivers (both natural and manmade) provide enrichment and resources for these city slickers. Everything here has adapted to the lack of sunlight, but visitors may find it wise to bring a sunlamp and some vitamin D gummies.

If losing yourself in a city that never sleeps makes your heart race, this is the realm for you! 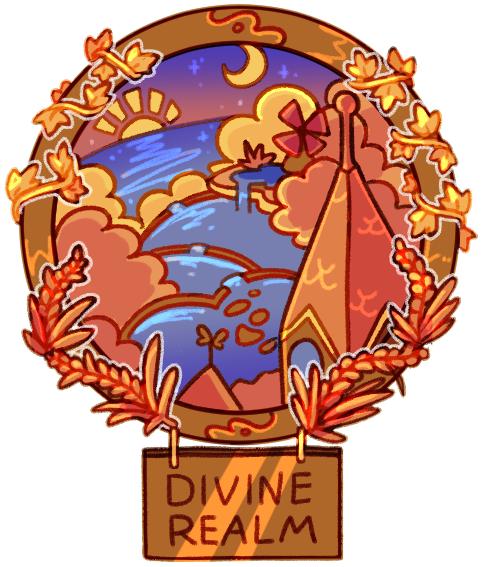 Named for its celestial appearance, the Divine Realm has no shortage of breathtaking and beautiful views. The population center of the realm is a massive golden city, Perihelion, which rises up from the clouds to meet the boundless sky. The Divine Realm is sparsely populated compared to the other realms. Its surface, known as the Sky Basin is made up of a mirror-like expanse dotted with clusters of star shaped crystals.

The beings that reside here are otherwordly and peculiar; wings are a common sight as the primary method of getting around. Small villages and structures are hidden among the Divine Realm's shifting cloud formations, which never seem to dissipate. Despite it's idyllic appearance, the realm has a rich history of grandiose conflicts as its more powerful residents engage in holy combat to earn their place among the stars that surround them.

The early idea for the Divine Realm was conceived to be the heavenly counterpart to the Strange Realm's underworld theme, even if they don't quite match those concepts anymore. It's built off of those depictions of the afterlife as a place within the clouds where you can always see the sky above and the deep blue atmosphere below! The Divine Realm is the least technologically advanced of the three, but it has magic juice oozing out of every pore to compensate.

If discovering what lies in the hidden world above the clouds piques your fancy, this is the realm for you!